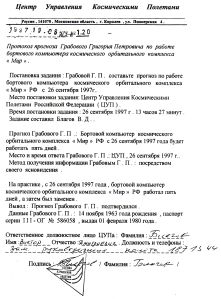 The tusk giving : G.P.Grabovoi, make the prognosis of the Russian Federation space orbital “Mir” complex board computer from 26 September 1997.

The task given by Blagov V.D,

The G.P.Grabovoi’s prognosis: The space orbital complex “Mir” RF board computer will work for five days.

The method of G.P.Grabovoi’s information : by means of clairvoyance .

On the practice :the junction of complex “Mir” and ship “Atlantis” was realized as it was planed to the and of 27 September 1997 and just before junction the axis declination took place.

The conclusion: The G.P.Grabovoi’s prognosis was confirmed.