The Practice of Control. The Way of Salvation. Mission Control Center 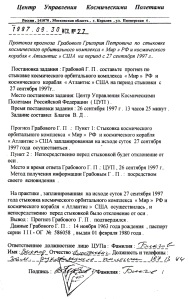 The tusk giving: G.P.Grabovoi, make the prognosis of junction the Russian

The G.P.Grabovoi’s prognosis: Point 1: The junction of the space orbital complex “Mir” RF and space ship “Atlantis” USA was planned to the and of 27 September 1997 would be realized. Point 2 Just before the junction the declination will be from axis. Place and time of G,P.Grabovoi’s answer : TSUP. 26 September 1997. The method of G.P.Grabovoi’s information : by means of clairvoyance .

On the practice :the board computer of space orbital complex “Mir” RF worked for five days from 26 September and then was changed. The conclusion: The G.P.Grabovoi’s prognosis was confirmed. Grigori Petrovich Grabovoi was born 14 November 1963 , has a passport series 11 OG No 586058, given 01 February 1980, phone 796-4888.